The mCHILLER TAKA is a compact air-cooled, low-charge ammonia chiller for semi-industrial and commercial applications with lower-capacity demands. The chiller is designed for data centers, HVAC and process cooling, and its weather-protected housing makes it suitable for outdoor use, maximizing the use of space inside a facility, said the manufacturer.

Until recently, the outdoor chiller market had been dominated by HFCs and hydrocarbons like propane (R290), and Mayekawa saw the potential of bringing an ammonia-based alternative to the market, explained Ødegaard during an interview.

“With today’s technologies, we can go down to around 160-180kW in cooling capacity with ammonia and still be financially competitive with HFCs, HFOs and hydrocarbons.”

He noted that there were a few other manufacturers showcasing new ammonia outdoor units at Chillventa, indicating that Mayekawa is “on the right track” with the mCHILLER TAKA.

According to Ødegaard, Mayekawa is currently looking at developing a larger-capacity model of the mCHILLER TAKA in the future to close the gap up to the 500kW.

In addition to the mCHILLER TAKA, the series includes a water-cooled ammonia chiller called mCHILLER FUGU, which has a cooling capacity of up to 1.35MW (384TR).

Both units are in operation in the market, and the manufacturer has seen significant interest in and demand for the products. This is, in part, due to the rising demand for natural refrigerant-based chillers.

“The trend is natural refrigerants and if you’re not on that track you will lose your area of success,” said Ødegaard. “Right now, it’s a matter of whether customers are going to use CO2 [R744], hydrocarbons, ammonia, air, or water. In Denmark, where Mayekawa Nordic is based, there’s no doubt that HFOs are out of the question. It’s not even something we need to talk about anymore.”

Mayekawa Europe recently received recognition for its best-in-class natural refrigerant systems by being awarded the Natural Refrigerants Label from ATMOsphere, publisher of Ammonia21.com.

The label is designed to help qualified manufacturers market products to new customers and regions in the natural refrigerants marketplace. It is also meant to help end users to identify top-performing suppliers.

Another trend that is shaping the market is customers’ demand for quicker product delivery, said Ødegaard.

“The demand from the market is that customers want products sooner, so we need to have standardized products on stock,” he added. “Also, after the impact that COVID-19 had on the supply chain, there’s a lot of focus on minimizing disruption to delivery.”

By offering a standardized product, Mayekawa is able to purchase components in bulk and assemble the standard model ahead of customers’ orders. The manufacturer can then make a few alterations to a chiller to meet a customer’s needs. This approach can also help improve cost efficiency, according to Ødegaard.

“Flexibility is key,” he said. “Our philosophy is to develop fewer products but to make them more flexible.”

To accommodate this new approach, Mayekawa is currently expanding its production facility in Europe to meet increased demand and to allow for additional storage.

Ødegaard also noted that product documentation is becoming an important aspect for customers, with more and more end users asking for Factory Acceptance Test (FAT) reports and other certificates. According to Ødegaard, this is driven by legislation and end users wanting to reduce risk and ensure long-term performance. 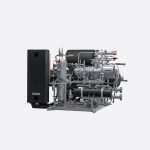