BigBasket, the largest Indian online grocer, has deployed ammonia/NH3 (R717)-based adsorption refrigeration units fueled by biomass (cashew shell waste) to provide medium-temperature cooling for fruits and vegetables at both its distribution center in Karnataka and one of its fulfillment centers in New Delhi.

The refrigeration units, called GreenCHILL, are supplied by New Delhi-based New Leaf Dynamic Technology. BigBasket and New Leaf were brought together by the International Finance Corporation (IFC) through its TechEmerge program, supported by the U.K. government. IFC described the BigBasket project in a recent post.

According to the IFC post, the GreenCHILL system has reduced fossil-fuel-based electricity by 90% and operating costs by 20% at the distribution center cold rooms, compared to conventional systems. It has also cut electricity consumption by 14% at the fulfillment center, with greater savings expected due to the flexibility of the modular cold racks.

The GreenCHILL system is widely used in the Indian agriculture sector, with both individual farmers and producing companies adopting it, said Akash Agarwal, CEO of New Leaf, in an interview with Ammonia21.com. BigBasket is the first adopter of the technology outside of the agricultural sector. The company also has plans to enter other Southeast Asia countries in the upcoming year.

Agarwal sees the storage segment as a ripe market. “There’s a huge requirement of cold rooms in India, as current production of fruit and vegetables is 320 million metric tons, but installed storage capacity is only 40 million metric tons,” he said. “Similarly, looking at Europe, Africa and America, there’s a growing need for clean cooling at cheaper cost due to increasing coal/fuel prices worldwide. In addition, a significant increase in post-harvest losses in developing countries have made cold-chain adoption a necessity.”

India has recently ratified the Kigali Agreement, therefore refrigeration solutions without harmful HFCs are essential to allow the country to develop this industry and honor its commitment. A recently signed Memorandum of Understanding between Danfoss and the Indian Institute of Science (IISc) aims at precisely this.

GreenCHILL is a stand-alone 4TR (14.1kW) refrigeration unit designed to be integrated in any standard industrial-grade cold room with up to 20 metric tons of storage capacity. It is a system based on adsorption refrigeration, combined with a biomass-fired 120l (26.4gal) hot-water generator that drives the adsorption cycle with an ammonia charge of about 30kg (66lbs).

The units can also be used when power outages occur, maintaining temperature for up to six hours; this also makes them a viable solution for facilities not connected to the electricity grid.

The technology was developed in 2012 and introduced in 2018. It took six years of research and development to manufacture “a product of commercial value to be sold at affordable prices,” noted Agarwal. The price of the refrigeration system in India is US$12,000 (€10,577), and the current estimated ROI is three to four years, said New Leaf. The company is also working to reduce the payback period to two to three years, noted the IFC post.

“The biomass used – cashew shell [waste] – is a carbon neutral and easily available fuel as farm wastage to run the systems,” explained Agarwal. “Hence the system is doubly sustainable in terms of energy and refrigerant.” The amount of biomass depends on cooling demand, and the average quantity required per day is around 50-120kg (110-265lbs) to maintain 2 to 25°C (36 to 77°F) temperature. For example, 130-150kg (287-331lbs) of cashew shell waste are needed per day to cool a 20 metric ton cold room at 4°C (39°F).

“Biomass like cashew shell [waste] is being procured from nearby a processing factory,” said Agarwal. Other types of biomasses are being bought directly from farmers’ fields. The current availability of biomass in India is estimated to be about 750 million metric tons per year. “It is abundantly available,” said Agarwal, who added that “biomass supply chain in India is quite a stable commercial business.”

However, Agarwal remarked that the system can run on “whichever energy source is cheaper at the customer end,” listing biomass, steam, waste heat and biogas as possible energy sources for the cold room. 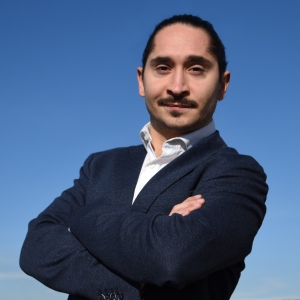