With packaged low-charge ammonia/NH3 (R717) systems becoming more common in the industrial refrigeration industry, the International Institute of Ammonia Refrigeration (IIAR) has added new guidelines to its latest IIAR-2 standard on how ammonia detection systems should be employed with these systems.

This was among the changes to detection-system guidelines in the 2021 version of IIAR-2, the general safety standard for ammonia refrigeration, which was released last September.

The ammonia detection requirements in IIAR-2 have been collected in a document published last October by Calibration Technologies Inc. (CTI) a Columbia, Missouri (U.S.)-based manufacturer of gas detection equipment that specializes in ammonia.

“The requirements for packaged ammonia systems are now better defined,” said Brian EuDaly, President of CTI, in an interview at the CTI booth at the IIAR 2022 Conference, held March 6-9 in Savannah, Georgia (U.S.) “They were a little ambiguous before.”

As explained in the CTI document, packaged systems are divided between indoor (in and out of the compressor room) and outdoor systems. Over 100HP systems in a compressor room require the highest (machinery room) detection level. Outside systems with sufficient “free aperture” (natural, passive ventilation) do not require gas detection, but over 100HP outside systems without free aperture need machinery-room-level detection.

The CTI document recommends using 0-100ppm sensors for packaged systems. “This range gives the best accuracy at very low concentrations which is appropriate in these areas,” it says.

For all compressor room applications, the IIAR-2 2021 standard raised the minimum number of low-range (25-150ppm) detectors from one to two “for redundancy,” said Debbie Koske, CTI’s Marketing Assistant, adding, “We have always recommended that.” She noted that some of CTI’s recommendation are “a little more conservative” than what is required in IIAR-2.

The best height at which to mount ammonia sensors has been a subject of “much confusion,” says the CTI document. “It’s one of our most frequently asked questions,” said Koske. CTI recommends installing detectors at “the breathing zone – about five feet off the floor. The detector also needs to be easily accessible for the required six-month calibration and output testing.

Among CTI’s detection devices is the EM2 Digital Entrance Monitor, introduced In 2020; it can be used to monitor the presence of ammonia and other gases. “The EM2 provides plant personnel an at-a-glance visual indication before [they enter] potentially dangerous areas,” said CTI in its product brochure.

“The requirements for packaged ammonia systems are now better defined.” 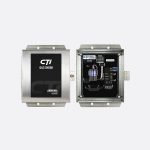