In response to the increasing interest in natural refrigerant-based heat pumps in North America, German manufacturer GEA is bringing its two low-charge ammonia/NH3 (R717)  industrial heat pumps – the RedGenium and the RedAstrum – to the U.S., following successful implementations in Europe.

This announcement was shared by Kenneth Hoffmann, Application Manager for GEA Refrigeration, during a presentation on the exhibit floor at the IIAR 2022 Conference, held in Savannah, Georgia (U.S.), from March 6 – 9.

“We are seeing growing requests for heat pumps in America,” stemming from the marked shift toward decarbonizing residential and commercial space and domestic hot water heating, Hoffmann said. “We don’t have any doubt that [the heat pumps] will be a very nice solution in the U.S.”

GEA’s U.S. manufacturing plant in York, Pennsylvania, has already built two ammonia heat pumps, which will be installed at a location in Canada, said Hoffmann, who declined to name the end user. “We are working closely to make sure that the same concept we developed in Europe will be identical in the U.S.”

In addition to food, dairy and beverage applications, GEA’s ammonia heat pumps are used to support district heating. In fact, in Europe there has been a significant increase in the use of heat pumps in district heating requiring 500 to 120,000kW. “We will see the same development across the world,” said Hoffmann. “Over the next five years we will see a dramatic increase in the number of requests.”

The RedGenium heat pump, which was showcased at the IIAR Conference, comes in 11 sizes, with heating (condensing) capacities ranging from 892 to 12,000MBH. Its maximum outlet water temperatures range from 158 to 203°F (70 to 95°C). It uses reciprocating compressors.

The cold side of the RedGenium includes an evaporator/separator, while the hot side features a condenser and, as options, a desuperheater and a subcooler. The ammonia charge of the heat pump falls between 48 and 229lbs (21.8 and 103.9kg). “The charge is not as low as [that of] the BluAstrum chiller, but it is still a low-charge ammonia system,” said Hoffmann.

With more than 100 RedGenium heat pumps installed, mostly in Europe, “we are quite certain this is a robust solution,” said Hoffmann.

The RedAstrum heat pump differs in several ways from the RedGenium. For example, it comes in seven sizes and uses screw compressors. On the hot side it includes an oil cooler and a condenser, with a subcooler as an option. Heating capacity ranges from 2,544 to 9,894MBH, while the maximum hot water outlet temperature is either 176 or 185°F (80 or 85°C). “Most heating demand can be covered with 185°F,” said Hoffmann.

“We are seeing growing requests for heat pumps in America.” 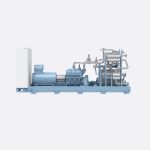