Higher Temperatures and Capacities are Priority for Sabroe’s Ammonia Products

Higher Temperatures and Capacities are Priority for Sabroe’s Ammonia Products

Johnson Controls International’s Sabroe brand, based in Denmark, is developing compressors and heat pumps to meet the growing demand for high-temperature, high-capacity heating systems that are based on natural refrigerants like ammonia/NH3 (R717).

“We’ve got a real push to extend the capacities around our heat pumps to serve district heating and larger industrial applications,” said Reynell. “And we’ve really been pushing the envelope on temperature as that demand for higher and higher temperatures increases.”

“We’ve got a real push to extend the capacities around our heat pumps to serve district heating and larger industrial applications. And we’ve really been pushing the envelope on temperature as that demand for higher and higher temperatures increases.”

Sabroe’s ammonia-based, single-stage SAB 407 screw compressor, which will be available next year, can deliver high condensing temperatures of up to 93°C (199°F) at a heating capacity of up to 25MW (7,109TR), explained Reynell.

A smaller version of the compressor, the SAB 273, offers up to 7MW (1,990TR) heating capacity and is already on the market, he added.

The SAB 407 compressor will be available in two models – SAB 407 S and SAB 407 L – and will be “ideal for large-scale ammonia heat pump installations,” according to the manufacturer.

The SAB 407 is the latest addition to the Sabroe HicaHP heat pump portfolio, which comes in six different models that range from 4MW (1,137TR) with the HicaHP 273 S to 25MW with the HicaHP 407 L model, which is in development.

According to Reynell, the SAB 407 is the “right product at the right time,” with a lot of the interest being driven by decarbonization efforts and gas prices.

Meanwhile, the Sabroe HeatPAC heat pump has been on the market for more than five years, with over 400 units in operation across Europe. The manufacturer has improved the system to offer higher temperatures of up to 95°C (203°F).

Johnson Controls is also working to develop products that provide temperatures above 100°C (212°F), where, according to Vickers, there is a lot of interest.

“There’s increased interest in extending natural refrigerant solutions into that temperature bracket,” he said. “We’re looking at opportunities to extend to 130°C [266°F], 160°C [320°F] and above and then building those higher temperatures into higher capacities.”

At its Chillventa booth, GEA said it is also planning to develop heat pumps that deliver temperatures that are above 100°C.

Vickers also added that Johnson Controls is facing the challenge of meeting market demand at an increased pace. “To deliver on decarbonization goals, there needs to be investment from the European community to accelerate the deployment of industrial heat pumps and get them to market at pace,” he said. “There’s a lot of work to be done.”

According to Reynell, interest in the Sabroe heat pumps is extending beyond Europe, with a lot of momentum building up in the U.S. with the passing of the Inflation Reduction Act (IRA). To meet this growing demand, Johnson Controls is planning to develop a roadmap for how to extend its natural refrigerants heat pumps portfolio into other geographies, he added.

“There needs to be investment from the European community to help us develop these products and get them to market at pace.”

Another priority of Johnson Controls is to improve the circularity and sustainability of its products, said Vickers.

“In prior years, it was very much product focused, very much refrigeration focused,” he said. “But now we’re talking increasingly about heating and heating and cooling simultaneously and how we manage that. The opportunity is tremendous.”

Johnson Controls is also expanding its testing facility in Denmark to allow for more extensive testing of its heat pump units before they enter the field. According to Vickers, the market is demanding more plug-and-play systems, and testing is an important part of offering such products.

“Commercially it’s critical that we have the ability to test on site, ironing out any small issues before units [are installed],” he said. “Getting that through from factory production to end-of-line test and performance testing. We spend multiple thousands of hours on a machine before we release it to the market.” 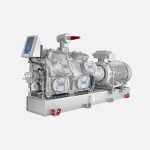 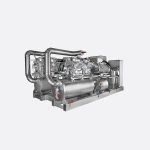