Ireland’s second-largest liquid milk processor, Aurivo has cut CO2e emissions at its Killygordon site by 80%, thanks to this multimillion-euro upgrade that included new liquid processing systems and energy-saving refrigeration and heat pump systems from GEA, according to a statement from the manufacturer.

The project has also been awarded Excellence in Energy Efficiency Design (EXEED) Certification from the Sustainable Energy Authority of Ireland.

The Aurivo site annually produces and packages 120 million L (31.7 million gal) of whole, skim and low-fat milk — including organic milk — for a range of brands. To stay competitive, Aurivo looked to increase efficiency and capacity, as well as reduce its carbon footprint. The company already used a green supplier for its electricity, so a key goal was to reduce overall energy use and cut reliance on fossil-fuel-fired water boilers, according to GEA.

Aurivo also opted to use GEA’s heat pump technology to reclaim and channel excess heat from the new cooling system to heat water for the milk pasteurization process. This capability positively impacted energy use and allowed Aurivo to reduce fossil-fuel-based heating from boilers, cutting carbon emissions by more than 780 metric tons per year, according to GEA.

The new refrigeration and heat pump system provides Aurivo with 1,200kW (341TR) of cooling and roughly the same in heating capacity. The GEA heat pump that collects and recycles excess energy from the chiller provides it with the remaining heat needed to take the water up to the pasteurization temperature of 78°C (172.4°F), or even a few degrees higher if required.

“This has rendered our traditional fuel-oil-burning boilers almost redundant for the pasteurization process,” explained Stephen Carlin, Aurivo’s Engineering Manager. “In fact, we now only have to turn the boilers on for one hour a week to kick-start each process cycle.”

Currently, Aurivo is only using 50% of the heat pump’s capacity. If necessary, it could double the amount of hot water produced and thereby potentially double the capacity for pasteurization.

“The project has demonstrated our ability to provide seamless integration and optimization of technologies for both wet processing and refrigeration and heat generation and local, around-the-clock expert support, which have all contributed to reducing costs and improving efficiency and sustainability,” said Paul McEntee, Business Development Manager at GEA Ireland.

The new refrigeration system was built on the site of the old, decommissioned one without any downtime. “One of our biggest fears was protracted downtime and not being able to deliver to our customers,” said Carlin. “That would have had serious consequences for the company. The whole process of switching over and commissioning was seamless from the perspective of getting both the liquid processing systems and the refrigeration and heat pump plants on stream.”

“It can be very cost-effective for customers to consider preconfigured, modularized systems that can be installed and commissioned within just a few days, and without significant labor costs,” commented Declan McNulty, Head of Equipment Sales at GEA Ireland. “The skid pasteurizer concept is gaining considerable traction in the marketplace. The system at Aurivo has reduced water and electricity usage and results in less volume of waste to drain.”

“The project has demonstrated our ability to provide seamless integration and optimization of technologies.” 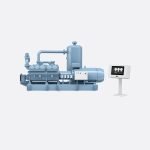